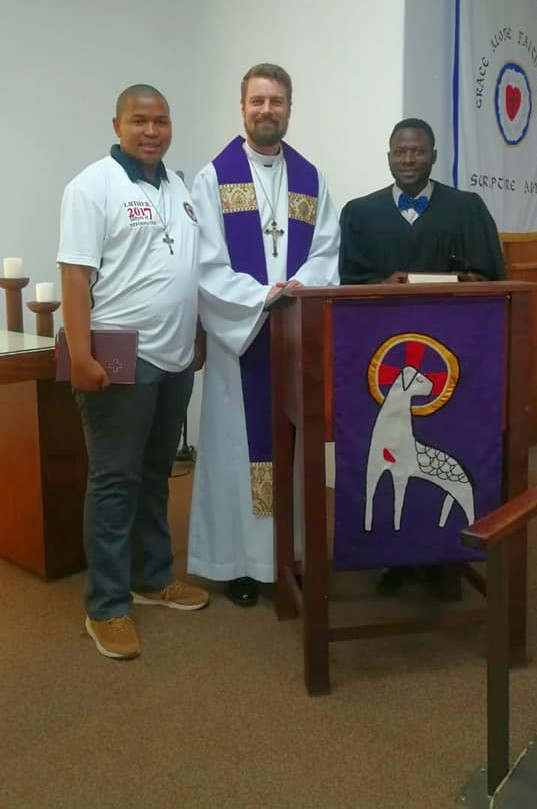 It was an honor to return to LTS to teach an intensive course in hermeneutics. For ten afternoons, three hours a day, I taught 28 men the principles of biblical interpretation. There were 26 students from LTS in the class and two guests. The guests were from South Africa and Germany. The students were from Congo, Ethiopia, South Africa, South Sudan, Uganda, and Zambia.

Our main text for the class was Biblical Interpretation: The Only Right Way by David Kuske. With this book as a guide, the students learned how to put into practice their belief in the inspiration and Christocentricity of the Scriptures. The class broke down into three sections.

First, we considered the proper way to interpret the Scriptures by focusing on six principles of biblical interpretation. The students learned which books of the Bible are canonical; how the Scripture’s worldview is a supernatural one; how the only text that is determinative is the original; and the importance of the historical, grammatical, and Scriptural settings of the Bible.

Second, we studied the history of interpretation from the time of Christ until the modern era. This included looking at the early church’s use of allegory, the middle ages and Renaissance’s continuation and elaboration of this allegorical method, and Luther returning the church to the simple, plain meaning of Scripture in the Reformation. The students also learned about how the errors of Pietism, Rationalism, and Existentialism interpret the Bible for their own purposes.

Finally, we gave an overview of false methods of interpretation that fall under the umbrella of historical-criticism. Among these were Rudolf Bultmann’s existential demythologizing approach and gospel reductionism. By comparing these false methods of interpretation to the true way of approaching Scripture, the students were able to see more clearly how important a class on hermeneutics is for guarding the good deposit entrusted to us in Scripture (2 Timothy 1:14).

I taught this course as a representative of St. Philip Lutheran Mission Society (SPLMS). SPLMS formed after several students from Concordia Theological Seminary in Fort Wayne, IN traveled to LTS in the spring of 2008. While there, we saw the influence the education at LTS had on Lutherans in Africa. Desiring to help the students learn Scripture and the Lutheran Confessions into the future, we created SPLMS to help provide financial aid to students, to pay for the travel of guest lecturers, and to raise money for other seminary needs (like the library extension for which we raised $15,000—it looks great, by the way, and will be a wonderful addition for the seminarians for years to come!). Due to donations of members of the board of directors, every dollar donated to SPLMS goes to help LTS and her students. So, it was an honor to return to LTS not only to teach but also to represent my brothers of SPLMS.

It was also a privilege to be a colleague of my seminary professor, Dr. John Pless, who is a regular visiting professor at LTS. He taught on Law and Gospel in the mornings while I taught on hermeneutics in the afternoons. He also, as is his tradition and the students’ delight, hosted a braai for the seminary on our last night in Pretoria.

Dr. Pless and I arrived in Johannesburg on March 1, and were picked up by Dr. Hiestermann, the new professor of New Testament and registrar at LTS. He informed us that a water main in Pretoria had broken and that the seminary had no running water for at least a few days. Dr. Pless and I had planned on staying at the seminary guesthouse but were instead graciously hosted for four nights at Dr. Hiestermann’s house (Dr. Pless) and the house of the rector, Dr. Winterle (Pr. Preus). A special thank you to both Dr. Winterle and Dr. Hiestermann and their families for their hospitality and brotherly conversation while we were with them. Once the water main was fixed, we were able to stay at the seminary guesthouse, which, thanks to the work done by members of St. Paul’s in Pretoria, is a convenient and comfortable place to reside while teaching at LTS.

In addition to teaching I was responsible for two sermons during our two weeks of daily chapel. I also preached at English Lutheran Fellowship in Randburg, Johannesburg on Sunday, March 8. Rev. Toby Ahlers is pastor there, as well as an instructor at LTS. He and I studied together for a year at Westfield House, Cambridge, England from 2008-2009. So, it was a special bonus for me to see an old friend and to converse with him and his wife and children over coffee and a braai.

The hospitality of the students, professors, staff, and area pastors left an especially good impression upon me. Thank you to several in particular: Emily, who cooked our lunches; Rosemarie and Martha for all of the photocopies made for my classes; Dr. Winterle, who with his wife, Lidia, hosted me for four nights, and also took a few of us to Pilanesberg National Park & Game Reserve for a day of recreation and excitement; Dr. Hiestermann, who with his wife, Renate, put on a delicious braai one evening; Pr. Günter Hohls and his wife Hanna for a lovely meal at their home; Rev. Mintesinot Birru Hanfato, who is doing a fine job overseeing the library at the seminary; and the students, whose appreciation for my class came in the form of bottles of delicious South African wine. All of these reasons for thanksgiving show that LTS not only has a dedication to Lutheran theology but also a cordial atmosphere that flows from their love of Christ and His Word.

It was a privilege to teach at LTS. Shortly after our departure, like many schools in the world, the seminary had to close her doors due to COVID-19. We pray they are open again soon in order to continue the good work they have begun. God grant LTS years of faithful teaching and diligent learning in the name of Christ, our Lord. 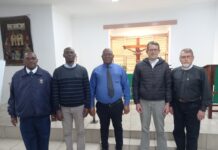 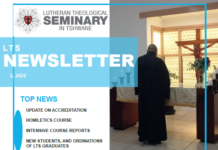 The Lutheran Theological Seminary in Tshwane (LTS) serves to train Christ’s followers as pastors, teachers, evangelists, missionaries, and deaconesses for faithful service in the Lutheran Church of Africa. The LTS is a registered Public Benefits Organization in South Africa.
Contact us: heinzah@live.de

We welcome any donations to the seminary. Thank you very much!